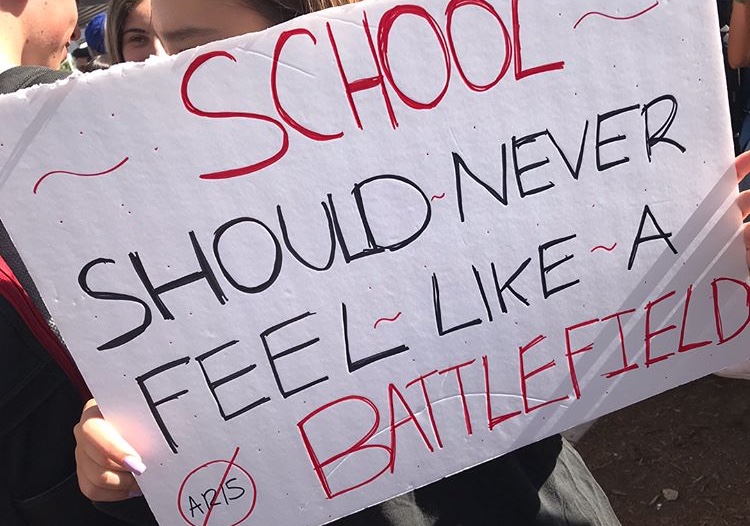 A tragedy that started a revolution

Valentine’s Day. A day filled with love, happiness, and kindness as kids laugh with their friends and walk to classes together. But for one school, this all changed around 2:20 p.m., when this momentous day turned into a calamity.

I can’t even put it into words. I used to live 20 minutes away from Stoneman Douglas High School. I always traveled to my grandparents’ house on the weekends from Weston, Florida to Boynton Beach. I always passed Stoneman High, its big crimson letters always noticeable even while passing by on the highway.

This Valentine’s Day, as I headed to my car, I stopped in my tracks as I glanced at my phone to see a bold CNN alert stating that there was a shooting at a southeastern Florida high school. Without knowing what happened, I instantly got scared as I thought that it was Cypress Bay High School, the high school that I would have attended, the school where all of my friends go every day to gain an education.

Relief filled my mind when I found out that my friends were all okay, yet the shock was just beginning to creep in. The number deaths increased within the blink of an eye. I personally didn’t know anyone from Stoneman, but many of my friends knew people who had to run for their lives and protect themselves. I had to comfort one of my best friends, who was in disbelief that something like this happened so close to her home.

It was definitely hard for me to sleep that night.

The next day, I was greeted by multiple Instagram posts about one of the victims, Jaime Guttenberg, a fourteen year old girl that danced her heart out at the same dance academy as many of my friends from Florida. Along with all of the other victims, they had so much of their lives ahead of them; yet just like that, seventeen lives were lost due to this senseless attack.

Though this is such a painful time, all of the survivors have showed everyone that their voices will always be heard. Many have confronted President Donald Trump, senator Marco Rubio, and the NRA on the need for changing gun laws. Social media has also helped to spread the word on how the Parkland community is being supported by a huge amount of the population. School walkouts have also been scheduled to show their support and stand hand in hand with Stoneman High School students.

A town once known to be the most peaceful and safe suburb in Florida, has now become closer than ever before. This should not have happened again. Not in Parkland, not in Orlando, not in Columbine, and not in Sandy Hook. We will not back down without a fight to end gun violence.