The Queen’s Gambit: Modern Twist on a Classic Story

A new show following a champion chess player from childhood through adult life was released on Netflix with overwhelmingly positive reviews. 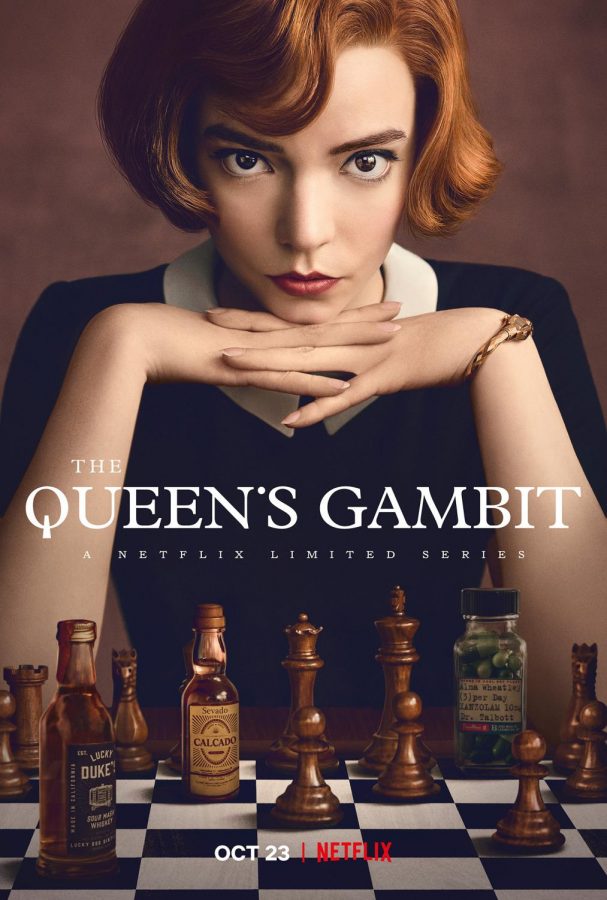 On Oct. 23, “The Queen’s Gambit,” rated TV-MA, was released on Netflix and immediately rose to number one on the charts. With a 98% liked rating, it’s easy to see why.

The show isn’t your classic chess champion story where the plot follows the hero storyline and the main character, usually a guy, rises to success, loses and starts to doubt himself, and then overcomes his struggles and wins it all. In fact, the story doesn’t follow a guy at all. It follows Elizabeth Harmon, who goes by Beth, a girl orphaned at a young age who learns chess from the janitor at her orphanage.

Set in the 1960s, the costuming and set immerse the reader in the time period. I especially loved seeing the home design of Beth’s house with its gaudy wallpaper and green carpet. With the Cold War brewing during the time, Russian paranoia also plays a big role in the show as the biggest threat is the Russian chess players.

“The Queen’s Gambit” is about an amazing chess player, yes, but the central focus is on Beth, not the game. Beth struggles with self-worth, trust issues and most importantly addiction. Her story is one of a woman in a field of mostly men whose strong female role models aren’t completely reliable. She’s been influenced by pills and alcohol since the age of eight and comes to depend on them to succeed in chess.

Anya Taylor-Joy, who plays Beth, is an amazing actress and wraps any viewer up in the character and the story. Beth’s character is so well-developed that it feels as if you’re watching someone’s life unfold rather than just a TV show. Her story is a rollercoaster that you won’t want to get off of. Personally, I finished all seven hour-long episodes in a day.

“The Queen’s Gambit” is a terrific show that I would recommend to all mature audiences. The story kept me glued to my seat. Even though each episode is almost an hour long, if you ever have several hours to spare, just pull up Netflix and you’ll be hooked.