In It For the Long Haul

Varsity football’s Oct. 16 game cancelled due to COVID-19 concerns while the team looks forward to districts 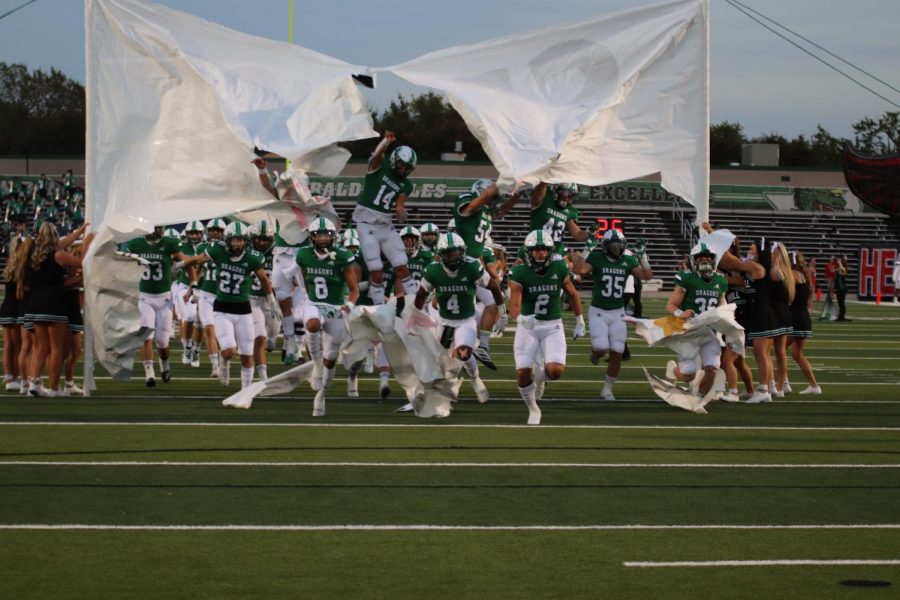 The Dragons take the field against Rockwall Heath on Oct. 2.

Varsity football was scheduled to play Denton Guyer Oct. 16 in their last game before districts. However, a positive case of COVID-19 among the members of the team required an immediate quarantine and cancellation of the game. This game would have been broadcast nationally by ESPN and would have been viewed by “more than 100,000 people” according to the district. The game will not be rescheduled.

“It was exciting because we felt that we had something to prove and to do that on a national level would’ve been awesome, so we were really upset when we heard we couldn’t play,” senior Mac Abell said.

The game against Denton Guyer was the last one before districts. Now the team is getting ready for districts despite having missed that chance. Though the virus has taken one game from them, they are “resetting themselves and their minds” to prepare for the scheduled season.

“We are a strong team and we will only worry about things we can control. The focus now is to get better every day, win our district and get into the playoffs healthy, strong, and mentally prepared to compete at the next level,” junior Barrett Baker said.

As in everything this year, COVID-19 is a possibility at any time. Members of the team believe that while it hasn’t had much of an effect yet, precautions need to be taken to avoid cases.

“We are all worried about COVID-19 because we love the game and we don’t want to have to stop playing it. Everyone keeps their space and only 1-3 guys are out because of it. Luckily we haven’t had multiple cases yet and it’s only been limited to one at a time,” senior Aiden Piel said.

Though the negative impact of the virus is apparent, it has “made the team strong” since everyone is relied upon.

“With COVID-19 the depth chart is always changing and you go from a backup to a starter in the blink of an eye so we’ve taken on the mindset that everyone has to prepare like a starter and have a ‘next guy up’ mindset. That has brought us closer and a more complete team instead of just 11 guys,” Travis Kenner (12) said.